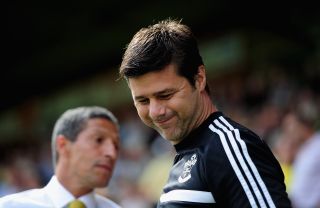 Norwich's England Under-21 international Nathan Redmond scored the game's only goal to condemn Southampton to their first defeat of the season.

But Pochettino felt that his side should have had a first-half penalty when Adam Lallana's shot cannoned off Bradley Johnson's outstretched arm, with referee Howard Webb motionless.

"It was a defender in the box (who handballed) and it should have been a penalty," said Pochettino.

"The overall feeling is that we played well, that we deserved a bit more from that match.

"We don't want to take credit away from Norwich, they actually played very well, but there was a penalty call that was not given and that would have changed completely the nature of the game.

"The referee was very close to the action so I really have no idea why that penalty wasn't given, it was blatant. It could've changed the game completely."

The Argentinian felt that his side, who created several good chances, played well enough to get something out of the game, despite the missed penalty call.

He added: "In the first 15 minutes Norwich were dominating the game, but after that I think we were able to match them and their strength and their effort. I think after those 15 minutes we played well.

"In the second half when we were playing our best football we conceded a goal and it was very hard to come back from that."

Club-record signing Pablo Daniel Osvaldo made his first start for Southampton and Pochettino admitted that the Italy international needs more time with the squad before fans see the best of him.

"I think it's normal that (Osvaldo and Rickie Lambert) weren't able to link up well, it takes times for a player to gel and to get into a squad.

"It's their first game together and he needs time (before he can) play well with Rickie."