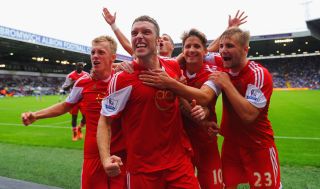 Lambert netted a last-minute penalty at The Hawthorns on Saturday to give his side a 1-0 win in their Premier League opener.

This came just three days after he scored the winner for England against Scotland at Wembley with his first touch in international football.

And Southampton boss Pochettino lauded the 31-year-old after Saturday’s game, insisting the former Bristol Rovers and Rochdale forward is a fine example for all players to follow.

"Overall he’s having a dream week," said the Argentinian.

"Everything is going well for him but the greatest thing about this whole story about Rickie Lambert is that he deserves everything that he’s getting because he’s a brilliant person and a great footballer."

Lambert’s winning goal was just reward for Southampton, as they put the hosts under long periods of pressure for much of the game, and Pochettino was in no doubt that his side were good value for the three points.

"I think in the overall reading of the game we were superior. In football nowadays you play for 94, 95 minutes and you always have to believe that you can win up until the last whistle," he added.

"And because of that I want to congratulate my team because even in the second half when West Brom was pressing us quite hard, my team showed resolve to keep it at 0-0 and we were able to get that winning goal at the end."