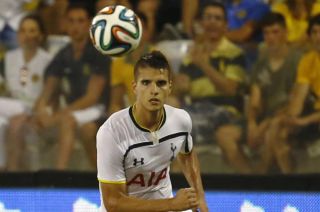 Spurs found themselves behind for much of the match and rarely looked likely of salvaging a first-leg result following Adrian Sardinero's 14th-minute opener at the Antonis Papadopoulos Stadium in Larnaca.

The hosts could have gone into the break with a larger lead and, although Pochettino introduced Mousa Dembele and Nacer Chadli from the bench early in the second period, they took a while to make a difference.

In fact, Spurs remained disappointing in the final third until Erik Lamela jogged on to the pitch in the 72nd minute, with the Argentinian setting up Roberto Soldado in style a few moments later.

Lamela added another assist in the 80th minute as he played in Harry Kane for the winner and Pochettino was left very pleased with the impact of those he sent on in the second half.

"In the end it was an important win and another victory," he told Spurs' official website. "It was a difficult game and I'm happy with the players.

"Erik Lamela, Nacer Chadli and Mousa Dembele had an impact when they came on which is important."

The second leg will take place on Thursday August 28 at White Hart Lane.