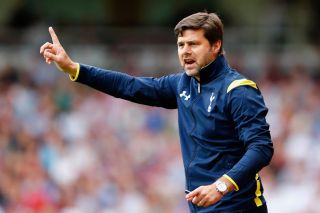 The home side were in total control throughout as they welcomed former boss Harry Redknapp back to White Hart Lane, Nacer Chadli opening the scoring in the 12th minute.

Eric Dier made it two on the half-hour mark by netting his second goal in as many matches, before Chadli doubled his tally seven minutes later.

The destination of the three points was not in doubt by the time Emmanuel Adebayor added a fourth in the 65th minute.

And Pochettino declared his delight at the display.

"We are very pleased," he said. "We are happy because we are in front of our supporters for the first game this season here.

However, the Argentine coach stressed that the season was still young and that he would be keeping his feet on the ground for the time being after maintaining his side's winning start.

"It's nothing because it's two games," he continued. "The most important thing is to try to develop our style and philosophy and today the team showed our basis.

"It's important that the team show that we play like a team.

"When we play like a team together, we can achieve something."

Record signing Erik Lamela - making his first Premier League start at White Hart Lane almost a year after joining the club - provided two assists for the hosts, and Pochettino believes the winger is growing in stature.

"It's true that he can improve a lot, but he's still young," he added. "Always when a young player arrives in a different country, a different culture, a different football, it's difficult to adapt.

"But we all know his skills and we are happy."

Tottenham host AEL in the UEFA Europa League on Thursday, before welcoming Liverpool to north London next weekend.