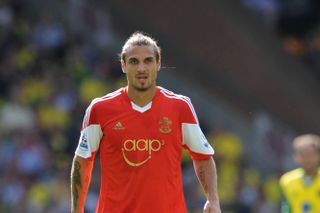 The Italy international was suspended for two weeks last Thursday after an incident at the club's training ground that Southampton considered "a breach of the conduct expected of its players".

Juventus director general Giuseppe Marotta confirmed the Serie A club's interest in the 28-year-old on Wednesday and Pochettino revealed a day later there was a chance Osvaldo may leave before the window closes on Friday.

With Southampton likely to want around €15 million to sell the former Roma man, Pochettino said: "At the moment there's no news regarding Dani Osvaldo.

"But there's still a day and a half left to finish the transfer activity so anything can happen.

"I don't know because I'm not in charge of that situation, anything is possible.

"For me the biggest talking point of the day is the game against Fulham, anything else is an individual matter that will be decided later.

"It's something that the club will evaluate if it does indeed happen."