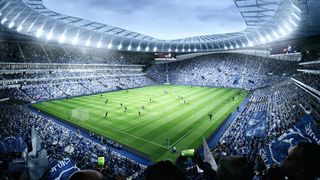 Mauricio Pochettino says Tottenham's new stadium is "so close" to being ready, although it could be February before the club relocates from Wembley.

Spurs were initially hoping to move back to the rebuilt White Hart Lane early in the season, but construction delays have kept them at the national stadium.

The club even had to play an EFL Cup home tie against fellow Premier League side Watford in Milton Keynes as Wembley was not available for that date.

A back-up plan will see Tottenham play their remaining 2018-19 home fixtures at Wembley should the new stadium not be completed, but Pochettino is positive.

"It is not in our mind. No, I am not worried that it [affects form] and when the stadium is ready we are going to move," he told a news conference ahead of Saturday's home game with Chelsea.

"Only if the chairman [Daniel Levy] changes the idea. But my idea is to move as soon as possible. If we can move tomorrow then tomorrow it is. But I know that it is difficult tomorrow.

"I think we will know better in January or the end of the year in December. I hope if it is not January then it is February. I think it is so close.

"Yesterday I was there and it is so close. The bowl is ready and there are a few things that need to be sorted and hope that the people who need to sign the permission will be nice and [sign] as soon as possible."

"The most important thing now is to be 100% focused on Chelsea."Mauricio on why the squad must concentrate on one game at a time during a tough run of fixtures.November 22, 2018

Pochettino has been keeping a close eye on the progress of the stadium project on top of his daily duties.

"Yesterday afternoon we were there, checking the facilities, the changing rooms and everything, We are so excited, we cannot wait to move there," he added.

"We understand that it is a fantastic project for the future of the club that will be forever. To wait maybe one or two months more, we need to have patience.

"We are so disappointed because we expect to play in 2018 and it should be ready for play before the end of the year but that is not going to be possible and we need to wish and hope that in January or February we can move there and it will be a fantastic moment for everyone, the supporters, the players. It will be a massive boost."