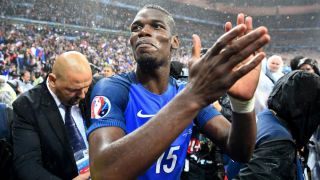 After facing criticism early in the tournament, Pogba was on target as France reached the semi-finals of Euro 2016 with a 5-2 win over Iceland.

Pogba, who has won four consecutive Serie A titles with Juventus since leaving Manchester United in 2012, will be under pressure to deliver in Thursday's blockbuster showdown with Germany, and Henry has faith in the 23-year-old's abilities.

"Forget about France, I think he can be one of the best midfielders in history," Henry told Sky Sports.

"He has the quality to do that. He needs to make sure he concentrates on what he can do well.

"What I love about him at the moment is that he's doing what the team's asking him to do; maybe he's sometimes a bit more fancy at Juventus but because [Antoine] Griezmann is playing behind Giroud for France, he has to defend a bit more.

"That's the sign of his intelligence. He's playing within himself in a way, to make sure the team has the right balance."

Pogba's exploits for both club and country have alerted some of Europe's biggest clubs, with former side United and Real Madrid reportedly ready to break the bank to acquire his services.

And Arsenal legend Henry would like to see his countryman in the Premier League again.

Henry added: "We all know about the quality, how good he is on the ball. He's an all-round player but he's understood his role at this tournament.

"Hopefully he can come back to the Premier League - it would be great for us and for whoever got him but he's still a Juve player and they're not going to let him go [easily]."