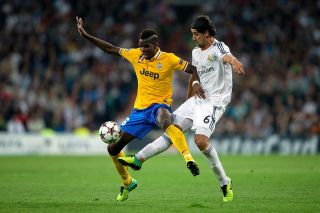 Chiellini was shown a straight red card for an alleged elbow on Cristiano Ronaldo two minutes after the interval in the Group B encounter, with Juventus already trailing 2-1.

Ronaldo had put Madrid in front inside four minutes and added a penalty after Fernando Llorente's equaliser for the Italians midway through the first half.

Pogba felt Chiellini's red card had a huge bearing on the result, which leaves Antonio Conte's side third in the group with just two points from three matches.

"We could have equalised in the second half but everything became more difficult after the red card," he said.

"When it was 11 against 11 we played well. We knew we had to defend well and restart quickly when we had the chance, and we did it very well in the first half.

"We are disappointed with the defeat but it's not over and we will try to win the next game.

"We can still make it out of the group; we'll give it all we've got in the next three games and see where that takes us."

Carlos Tevez agreed the dismissal made life very tough for Juventus, but also conceded that he and his team-mates were guilty of making their own errors.

"We are disappointed with the result, but I think we played a very good game," said Tevez.

"It was very difficult in the second half with 10 men.

"We don't have to make excuses. We made mistakes today and when you make mistakes against these opponents you are always punished."