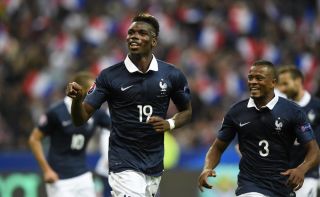 Pogba was commanding in the centre of France's midfield, scoring a goal and assisting another as Didier Deschamps' men reached the quarter-finals in Brazil.

The 21-year-old's efforts were rewarded with the Young Player of the Tournament award – continuing his rapid rise in football after swapping Manchester United for Juve in 2012.

And Pogba, who has reportedly attracted the attention of Real Madrid, Chelsea and Paris Saint-Germain, said he is on a mission to achieve his aim.

"I'm very proud to receive this award and it was an honour for me to play in the World Cup," the Frenchman told FIFA.com on Wednesday.

"I can't predict what's going to happen in the future but I'm going to do all I can to win even more trophies.

"I'm going to keep working hard. My aim is to become the best player in the world."