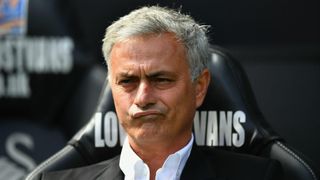 United have made a blistering start to the season, winning their opening three matches, having scored 10 goals without conceding.

But as United prepare for Saturday's trip to Stoke City, manager Mourinho is ready to prioritize three points over the club's newfound attacking style of play.

"We try to play the best we can," Mourinho said. "We know that if you look in a pragmatic way, you see the last winners of the Premier League [Antonio Conte’s Chelsea], they did not play attacking football.

"They played defensive football and counter-attack football. So according to the results, that is the way to win the Premier League.

"If you ask me, are we going to go there and play with seven at the back, like some teams do, five plus two? No, we're not going to do that. We're going to try and play well and score goals.

"But if our opponent is better than us and dominant, we are humble enough to transform our way of playing to play for a result."