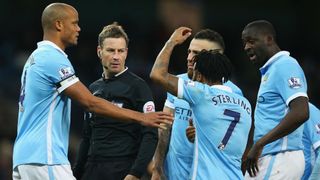 The match between the title contenders was goalless until the 53rd minute, when Harry Kane netted from the spot after Clattenburg adjudged Raheem Sterling to have handled Danny Rose's left-wing cross.

A leaping Sterling was struck by the ball at the left corner of the penalty area with his back turned, with replays suggesting it hit him in the ribs under his left arm.

City equalised through substitute Kelechi Iheanacho before Christian Eriksen hit an 83rd-minute winner that could still prove crucial in the final reckoning.

But Poll was unflinching in his criticism of Clattenburg, accusing him of guessing on the handball claim with so many variables at play.

"Mark Clattenburg is the best referee in the Premier League but I'm afraid he broke the golden rule of officiating when he gave Tottenham Hotspur a penalty," the former World Cup official said in a column for the Daily Mail.

"The golden rule is that if something happens and you don't see it, that's life. But you cannot, must not, give something that you thought had happened.

"Any argument of whether it was inside the box was irrelevant.  It just wasn't handball and Clattenburg was wrong.

"Even if the ball had hit Sterling's arm, it shouldn't have been a penalty because he had turned his head and wasn't looking at the ball, therefore it can't have been deliberate.

"Tottenham might win the league as a result of the referee's mistake."