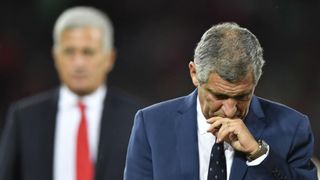 Portugal must forget their Euro 2016 triumph if they are to have a successful qualifying campaign for the 2018 World Cup, says Fernando Santos.

Portugal won their maiden major international trophy by defeating France 1-0 after extra-time in the European Championship final in July, but their first competitive outing since that triumph on Tuesday ended in a 2-0 defeat to Switzerland.

Goals from Breel Embolo and Admir Mehmedi secured the three points for Switzerland at St Jakob-Park, ending Santos' run of 14 competitive matches without defeat since taking charge in September 2014.

With his team trailing their main rivals for top spot in Group B, Santos wants Portugal to put their historic triumph in Paris firmly in the past.

"We started the game well, we dominated the first 15, 20 minutes but then we were dazzled [by Switzerland] and were a bit pragmatic," Santos told RTP.

"We conceded in the only time that Switzerland was near our goal and afterwards we stepped back and allowed them to win individual battles – the European championship has to be forgotten.

"We were not as strong as we usually are. We are in qualifying and that cannot happen."

Santos introduced Andre Silva and Joao Mario for Eder and William Carvalho at half-time, while Ricardo Quaresma replaced Joao Moutinho in the 68th minute to allow Nani to move into a central role.

The coach was pleased to see improvement in his team – Nani hit the post with eight minutes remaining – and felt one goal could have made all the difference.

Santos added: "Trailing 2-0, I tried to change things, play with two strikers. We had chances to score, we could have created more.

"In the latter stages, Switzerland just defended but we created some danger in the final minutes when we played with more heart.

"If we had scored a goal, we could have got back in the game."