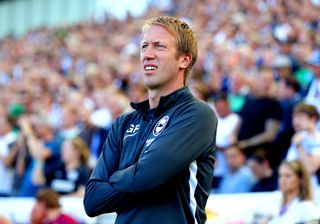 Brighton boss Graham Potter was disappointed to see victory snatched away at the death as a late strike from substitute Jeff Hendrick earned Burnley a draw at the Amex Stadium.

Neal Maupay broke the deadlock after a goalless first half with a superb half-volley to put the Seagulls in front.

The home side looked on course for their first home victory since March, only for the ball to fall to Hendrick outside the area and he sent a powerful drive into the bottom corner in the 91st minute.

Potter said: “(We are) disappointed with the result of course and the manner of the goal, (being) so late. I thought the boys put such a lot into the game.

“They scored from their only shot on target, but it was a good goal in fairness to them.

“Overall we’re a bit disappointed, but that’s the Premier League, if you don’t get that second goal or if you don’t kill teams off then there’s a chance of course, because of the quality of the opposition, that you could concede and that’s what happened.”

Brighton have not managed to win at home in the league since their 1-0 victory over Huddersfield on March 2 and have now lost five and drawn three of their last eight games at the Amex, leaking 17 goals while scoring just four.

Asked about home form, Potter said: “It’s important, because you want to win your home games, (but) I think the important thing is that the supporters are seeing a team that are at least trying to give everything.

“It goes without saying that we’d like to win for them and for ourselves as well, because we’re trying hard and I think you can see that, but it’ll come.”

Sean Dyche was full of praise for goalscorer Hendrick and was also pleased by the impact his substitutions made.

The Burnley boss said: “We huffed and puffed without ever looking like too much, so I was pleased with the changes, because the changes definitely affected the game, both individually and tactically.

“And then we end up scoring a fantastic goal, the build-up play to it and a brilliant strike for Jeff.”

On Hendrick’s contribution, he added: “He does so many good jobs for us, even today he starts wide, he comes inside. He’s a top lad around the place, he’s a very good player in my opinion and he scored a very good goal today.”