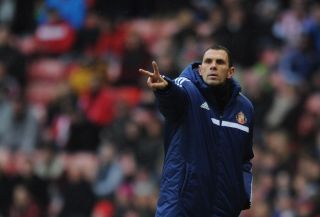 The Premier League strugglers hold a 2-1 advantage ahead of the semi-final second leg against Manchester United, but David Moyes' side are strong favourites to reach the final.

Poyet believes Sunderland have already been written off despite being in front in the tie, with many expecting a mouth-watering Manchester derby in the final.

And the Uruguayan has called on his players not to let the opportunity to play in a Wembley showpiece pass them by.

"I think it's the first time for a while - apart from maybe the FA Cup game (against Carlisle United) - that I'm going to go into the game myself personally with a different approach,  because this a game to really, really enjoy.

"I'm sure that if it doesn't go my way I'm going to be devastated, but this a great opportunity.

"So many fans, a great stadium opposition desperate to get a trophy and we've got the chance to go there with a little advantage, so let's enjoy this one. The league has been so different, so let's enjoy it.

"I wouldn't let that chance go past if I was a player. I would make sure (I do) everything possible and more to get to the final and give the fans something to cheer about and to be happy and proud of the team."