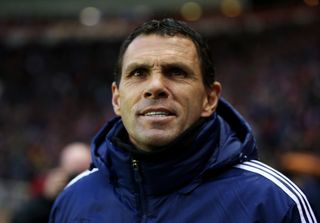 Goals from Adam Johnson and El-Hadji Ba, plus a Sean O'Hanlon own goal, saw the Premier League outfit progress to the fourth round with a 3-1 victory at the Stadium of Light on Sunday.

Matty Robson had levelled for the League One visitors in the 43rd minute, but Sunderland stepped up a level in the second half to book a tie with either Kidderminster Harriers or Peterborough United.

Poyet acknowledged his side needed to raise their game after the interval, and was happy they saw off a spirited display from Graham Kavanagh's team.

"It's always difficult because if you don't score two or three goals, you know that at any time the opposition can create a chance," the Uruguayan said.

"I think Carlisle did very well - credit to them, they really put us under pressure at the end of the first half, but the more the game went on and on the power, the strength, the fitness and the quality started to show.

"I was expecting to score goals today, luckily we got three so I'm happy to win and get through to the next round.

"It was a professional win."