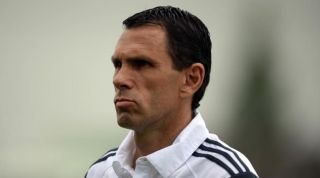 The visitors fell behind courtesy of a bizarre own goal from Santiago Vergini on 12 minutes, the defender finding his own net from the edge of the area to set the tone for a dismal Sunderland display.

Graziano Pelle went on to score twice, while another own goal - this time from Liam Bridcutt - and further strikes from Jack Cork, Dusan Tadic, Victor Wanyama and Sadio Mane sent Sunderland spinning to their heaviest Premier League defeat.

Manager Poyet was understandably furious at his side's performance and swiftly expressed sympathy for the travelling fans at St Mary's Stadium.

"It's the most embarrassing time I've had on a football pitch, without any doubt," he said after the game.

Sunderland unravelled with alarming ease as the game wore on.

Poyet was at a loss to explain the collapse, but did highlight a penalty appeal that went against his side when they trailed 2-0.

He added: "I can explain almost anything about the game until the penalty really. After that I have no explanation.

"We started well but we conceded a goal where even if you watch it 20 times you don't know how it can happen.

"Then the second goal I think we cleared the ball and it hit somebody [and] came back and that makes you think 'It's not going to be our day'."

Of his side's rejected appeal for a spot-kick, which saw Southampton goalkeeper Fraser Forster escape punishment for an apparent foul on Steven Fletcher, Poyet said: "If the referee does his job then it's a penalty and a red card. It might be 2-1, but we're talking about a different game then. Not 8-0, I can assure you that."

Poyet is sure to demand a reaction from his side when they host Arsenal next Saturday.