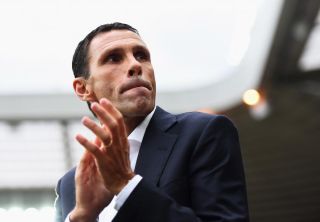 The Wearsiders brought in no fewer than nine players throughout the window as they seek to improve on a 14th-placed finish in the Premier League last term.

Head coach Poyet feels that selling the club to new signings, which included the likes of Jack Rodwell and Will Buckley, was made easier by the fact he himself signed a new deal at the Stadium of Light until 2016 in May.

"No doubt things are a little bit more clear with what I wanted to create and the players I wanted to bring," he told the Sunderland Echo.

"I was able to say to Jack Rodwell that I wanted him to join us because we're trying to do things in a certain way over the next six months to a year.

"Look at someone like Bucker [Will Buckley]. I know him and he knows me and what I want from him.

"He could play for another manager, no doubt. But he knows exactly what is going to happen here.

"Those things give you a bit of help in competing for players. We've been able to tell these players what we're hoping to achieve in the next two years."