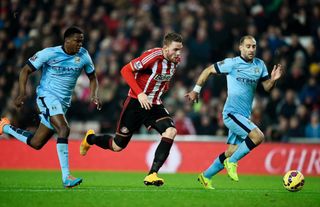 Wickham, who re-signed on Tuesday with a four-and-a-half year deal, is yet to make his senior international debut, but has represented his nation at four different under-age levels.

Poyet said Wickham, who has scored twice in their past nine meetings, has years of experience beyond his age - 21.

The Ipswich Town product should not play again for the England Under-21 side, according to Poyet, as he continues to make his mark in the top flight.

"He wants to play in the middle and he will sooner or later, because he's a number nine," Poyet said, as reported by The Mirror.

"Then we tried him on the left this season, I liked what I saw and he's got better there.

"He's more mature, he knows his game better and what he can do for us. He keeps improving and there's more to come, I'm sure there's more. If he's in the middle, it's easier for him.

"There are not too many young English players with that power. People who worked with him at England U21, they'd be surprised if they got the chance to see him again now.

"They'd be surprised at how much he's improved and how mature he is. Now it depends on us making him better and him scoring goals."

Poyet, who put the pressure on Wickham to re-sign in the off-season, said he was delighted he extended his stay on Wearside.

"I'm not going to blame anyone, but sometimes when you pay a lot of money for a player, we all think that player's ready, it doesn't matter if he's 18 or 28," he said.

"There's always room for improvement so maybe he didn't finish his football education in that natural way.

"When you saw him at Ipswich at that age and you sign him for that money naturally everyone thinks he has to play immediately.

"But he found himself in and out and coming back to the club with different managers and never in a position to play.

"To improve, you need to play against the biggest and the best.

"It's important for me that Connor's signed his contract."