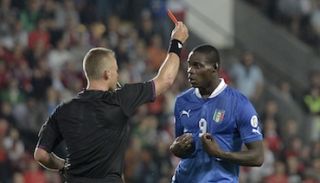 "Good morning. Yesterday my reaction was not the right one, I offer an apology," Balotelli wrote on his Twitter account.

He was dismissed in the second half of the Group B match in Prague for a second bookable offence and reacted by smashing his fist against the perspex wall as he entered the players' tunnel.

Television pictures also showed him kicking the other wall.

Balotelli also wrote an angry message on Twitter suggesting fans should support another team in the Confederations Cup and telling readers to watch the whole match again.

Prandelli said the maverick striker, who has been relatively well-behaved since joining AC Milan from Manchester City in January, had to get used to provocation.

"He must understand that like all great players he will always be the target of provocation," Prandelli told the ANSA news agency. "If it passes that test, then it gives him an edge against the opponent."

"In the next few days we will also talk about the use of Twitter... sincerely, I preferred Mario's second message," he added, referring to the apology.

Unbeaten Italy have a four-point lead over Bulgaria in the group with the Czechs a further point back in third place.