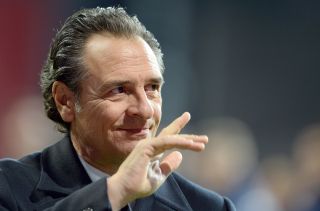 Prandelli is expected to quit as Italy coach after the 2014 World Cup and has been heavily linked with a move to the Serie A champions.

But Chiellini said any such talk had come too soon with Antonio Conte doing a good job at the helm at Juventus.

"I think all this is premature, as we are so tied to Antonio Conte at Juventus and Prandelli for Italy," the Italy defender said.

"We are doing well and cannot help but speak highly of Prandelli, but these rumours of him joining Juventus are just fantasy football."

Juventus are unbeaten in Serie A but sit third, two points behind league leaders Roma who have made a perfect start to the campaign.

Chiellini said he was shocked by the start Roma had made with Rudi Garcia's men scoring 20 goals and conceding just one on their way to seven straight wins.

"Roma surprised everyone, as I did not expect them to start with seven consecutive victories," he said.

"They are also playing great football and at times remind me of the Juventus we saw two years ago, especially in their enthusiasm to overcome difficult situations.

"They have such energy that it allows them to do anything. It is exciting to watch them play. They can be stopped, just as all teams can be stopped, but I hope they are not too consistent like this.

"Considering the fixture list Juventus have had a good start and we must continue taking it one game at a time."