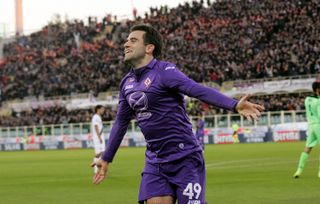 Rossi strained ligaments in his right knee during Fiorentina's win over Livorno earlier this month and is expected to spend a considerable amount of time on the sidelines recovering.

Differing reports have suggested he could be out for anything between three and 18 months.

Having flown to America for his rehabilitation, Rossi will hope to return before the end of the season so he can push for a place in Prandelli's 23-man squad.

The 26-year-old is top scorer in Serie A this season with 14 goals, and Prandelli insisted he will give the striker as much time as possible to be ready for Brazil.

"Considering that I know him, and I will wait until the last (moment to decide)."

Prandelli also refused to rule out selecting Sassuolo striker Domenico Beradi for his squad, but admitted it may be too soon for the 19-year-old who has scored 11 goals this season.

"It's about proving quality," he added. "Let's let him grow up, and not give them too much responsibility."