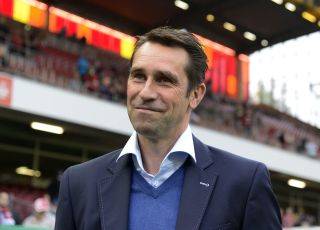 The Hertha general manager has put pen to paper on deal with the Bundesliga club until 2017, with his previous contract due to expire next year.

Coach Jos Luhukay also committed to the Berlin outfit by signing a new deal in May and 46-year-old former Germany striker Preetz, who replaced Dieter Hoeness in 2009, is determined to ensure Hertha continue to progress.

"I thank the committees of the Association for the trust and am looking forward to further cooperation," said Preetz.

"Together we will do everything we can to move on our chosen path and consistently promote the development of Hertha BSC."

Hertha are fourth in the Bundesliga after winning four of their first nine games following promotion last season and president Werner Gegenbauer believes Preetz can play a key role ensuring they kick on.

"I am pleased with the unanimous vote of the Advisory Board of Hertha BSC, to extend the contract with Michael Preetz to 2017. We are convinced that together to have a successful future," Gegenbauer said.