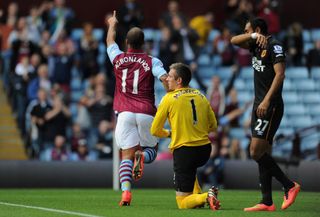 Steve Bruce's side bowed out of the UEFA Europa League to Lokeren on Thursday, and first-half goals from Gabriel Agbonlahor and Andreas Weimann gave a lacklustre Hull a mountain to climb at Villa Park.

Villa's strong start to the game was rewarded when Agbonlahor opened the scoring with a smart finish after 16 minutes.

Weimann played a significant role in the opener and the Austrian got on the scoresheet shortly after the half-hour mark.

Kieran Richardson cut the ball back from the left and Weimann, who netted twice in the corresponding fixture last season, put Villa in control.

Hull rallied in the second half and pulled one back through Nikica Jelavic, but the damage had been done as Paul Lambert's men continued their unbeaten Premier League start to the season and banished memories of their midweek League Cup defeat to Leyton Orient.

Fabian Delph, fresh from his maiden England call-up, started well, clipping the crossbar early on and keeping Villa ticking over in the centre of the park.

Hull were sluggish following their European exit, and were punished when Agbonlahor turned smartly and fired home from inside the area.

The striker opened his account for the season after a neat pass from Weimann around the point that Hull appeared to be growing into the game.

Agbonlahor then forced Hull debutant Michael Dawson into a hurried clearance following a dangerous cross from the left before the visitors went close shortly after when Tom Huddlestone's shot from distance deflected marginally wide off Delph.

However, Dawson's first outing since joining from Tottenham got worse when he sloppily gave the ball away on the edge of the penalty area.

Richardson then attacked down the left and crossed for Weimann, who had time to pick his spot and send Villa in 2-0 up at the break, although it could have been three when Ashley Westwood's free-kick hit the post late in the half.

Hull began the second half brighter but struggled to create chances - Bruce opting to replace Tom Ince with Robbie Brady in an attempt to get a foothold in the game.

Amid late pressure, Lambert's defence conceded their first goal of the top-flight campaign when Jelavic headed home via a deflection off Aly Cissokho from a corner with 16 minutes remaining.

That proved no more than a consolation, however, with Bruce likely to consider his attacking options ahead of the transfer window's closure following a largely under-par display in the West Midlands.

Jake Livermore's late free-kick that hit the bar was as close as Hull came to snatching a point, and a laboured attacking showing may prompt Bruce to delve into the transfer market before the window’s closure on Monday.