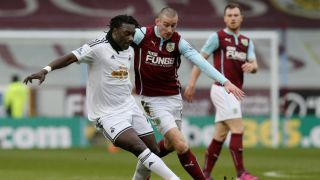 A low-key affair was settled by a scrappy goal midway through the second half, as Swansea were able to build on last week's 2-1 win over Manchester United.

Home goalkeeper Tom Heaton produced a superb save to keep out former Burnley loanee Jack Cork at the back post, but Cork's rebound struck Trippier and was then fumbled over the line by the shot-stopper.

Victory lifts Swansea up to eighth in the table, while Burnley remain mired in the bottom three, with QPR just above them on goal difference with a game in hand.

It was a disappointing return to action for a Burnley side who had shocked leaders Chelsea to earn a 1-1 draw at Stamford Bridge last weekend.

The hosts, unchanged from that clash, made the brighter start, with George Boyd thumping a volley straight at Lukasz Fabianski in the fourth minute.

The Swansea goalkeeper was called into action again midway through the half, spreading himself well to smother Ashley Barnes' close-range effort after Danny Ings' smart turn had caused confusion between Ashley Williams and Cork.

Swansea had their first sight of goal in the 25th minute when Wayne Routledge lofted an effort over the advancing Heaton, but the ball dropped wide.

Bafetimbi Gomis then wasted a golden opportunity to open the scoring five minutes prior to the interval when, after running onto Jonjo Shelvey's ball in behind, the striker blazed his effort over the crossbar.

The home side began brightly after the break and felt they should have had a penalty when the ball struck Federico Fernandez on the arm in a scramble following Fabianski's save from Michael Kightly.

Burnley continued to look the more likely to break the deadlock, and Barnes went close on the hour mark with a smart volley on the turn that went wide of the right-hand post.

Slightly against the run of play, the visitors took the lead in the 64th minute.

Gomis' header found its way to Cork, whose close-range shot was brilliantly tipped onto the crossbar by Heaton. Cork's second effort was heading wide of goal until it struck Trippier on the thigh, and Heaton failed to keep hold of the ball as it squirmed over the line.