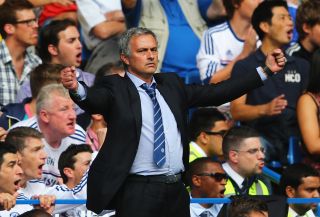 Frank Lampard was denied the first goal of the Portuguese's comeback when Allan McGregor brilliantly saved his early penalty, but Chelsea were ahead shortly after when Oscar completed a flowing move with a poked finish.

The hosts' lead was then doubled by Lampard when he smashed home a free-kick from distance to set up a second half that saw little action, with Premier League new-boys Hull battling valiantly to stay in touch with their illustrious opponents.

And Mourinho's side subsequently had little trouble in helping the 50-year-old secure his first Premier League points since September 2007, while the size of the visitors' task for the upcoming season was fully underlined.

Perhaps unsurprisingly, Mourinho handed starts to two stalwarts of his first spell at the club, with John Terry and Lampard returning at centre-back and in central midfield respectively. Steve Bruce, meanwhile, abandoned the 3-5-2 formation that served his side so well in Championship last season in order to deploy a 4-3-3 set-up with loanee striker Danny Graham leading the line.

The build-up to Sunday's game had inevitably focused on Mourinho's return to Chelsea, and the Portuguese's second stint in charge appeared set for a dream start when Hull goalkeeper McGregor needlessly wandered to the edge of his box to fell Fernando Torres with five minutes gone and concede a penalty.

But the Scot would earn himself an instant reprieve, diving low to his right to emphatically pound away Lampard's well-hit spot-kick and keep the scores level.

However, it would take just under seven minutes for Chelsea to finally grab the breakthrough, when a fine exchange allowed Kevin De Bruyne to work space and the Belgian picked out a slide-rule pass that Oscar poked under McGregor's despairing dive.

Lampard went close with a drive inside the box in the immediate aftermath of the first goal, but he eventually also got on the scoresheet midway through the first half courtesy of a ferocious 30-yard free-kick that dipped over the visiting goalkeeper.

The second was little more than Chelsea had deserved, and they began to play with a degree of comfort rarely seen in a season-opening fixture after carving out a two-goal advantage.

They even almost added a third just before half-time only for McGregor to somehow prevent a Branislav Ivanovic header from crossing the line - a fact confirmed by the use of the Premier League's new goal-line technology.

The second half started at a leisurely pace, with Chelsea happy to spend the opening 15 minutes keeping possession and stamping out any Hull hopes of a meaningful counter-attack with some ruthless defending. This prompted visiting manager Bruce to make a double substitution, with close-season acquisitions Jake Livermore and Tom Huddlestone replacing David Meyler and Graham as Hull desperately searched for a way back into the match.

Both teams had credible penalty shouts soon after - with Robbie Brady bundling Torres over in the box before Lampard's arm appeared to block a Hull shot - but referee Jon Moss waved both claims away.

A chipped effort from substitute Andre Schurrle was the closest either side came to scoring again in the final moments of the match, with Chelsea squeezing all life out of a match that ended in comfortable circumstances.