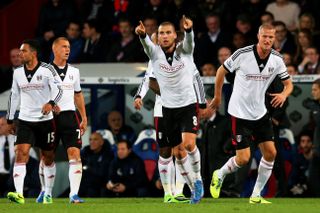 Adrian Mariappa headed the hosts in front early on at Selhurst Park before Kasami and Sidwell produced magnificent efforts to put Martin Jol's men ahead at the break.

Dimitar Berbatov and Philippe Senderos then added one goal each after the interval to give Fulham recorded back-to-back wins for the first time this season condemn Palace to five consecutive Premier League defeats.

Palace made three changes from their 3-1 loss to Liverpool, bringing in Jose Campana for Jimmy Kebe while Dwight Gayle and Yannick Bolasie replaced Marouane Chamakh and Cameron Jerome.

For Fulham, Maarten Stekelenburg made only his second Premier League start of the season and Scott Parker returned to action after limping off with a calf injury during the defeat to Cardiff City in September.

The hosts were ahead early on, registering just their sixth league goal of the season after six minutes.

Mariappa rose above Brede Hangeland and got his head on the end of a Jason Puncehon cross from the left to power home his first goal for the club.

Amid a rocking Selhurst Park atmosphere, the hosts continued to dominate with Stuart O'Keefe the next to threaten, shooting just wide after Sidwell lost possession in midfield.

However, Kasami restored parity with a goal of the highest quality after 19 minutes, as he brought down a lofted ball from Sascha Riether on his chest while on the move.

The Switzerland international then hit a sumptuous right-foot volley over Julian Speroni and into the far corner of the goal to record his second of the season in spectacular fashion. This goal saw Palace maintain their unwanted run of failing to keep a clean sheet in the league this season.

After scoring a goal apiece in the opening 20 minutes, neither side were able to create any further clear-cut chances until Sidwell fired home brilliantly on the stroke of half-time.

The midfielder expertly volleyed home past a helpless Speroni after a Bryan Ruiz free-kick had been blocked by the Palace wall.

Fulham almost made it 3-1 three minutes after the break when Speroni made up for giving the ball away initially with a smart save to deny Darren Bent.

However, just a minute later, Berbatov extended the visitors' advantage with his first Premier League goal of the campaign.

The former Manchester United forward held off a challenge from Mariappa to direct Ruiz's set-piece delivery into the far corner of Speroni's net.

Fulham were firmly in control by this point, and they grabbed a fourth on 55 minutes through Senderos, with the defender's controlled volley at the far post from another dangerous Ruiz corner squirming its way under Speroni.

Opportunities were few and far between after that, although O'Keefe and Dean Moxey both tested Stekelenburg from distance to no avail.