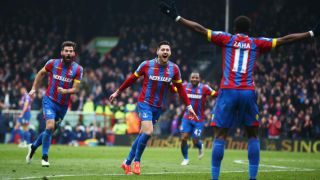 A seventh win under Alan Pardew takes Palace to the safe haven of mid-table, but QPR's record of having lost all but one of their league games on the road remains after a sloppy defensive performance.

Chris Ramsey brought Shaun Wright-Phillips and Adel Taarabt in from the cold as he sought a spark to ignite QPR's flagging efforts away from Loftus Road – winger Wright-Phillips making his first league start since September 2013.

But the changes failed to have a positive impact as Wilfried Zaha bravely put the hosts ahead in the 21st minute with his first goal since his second Palace debut in August.

Taarabt looked QPR's best bet of finding an equaliser, but two goals in as many minutes from James McArthur and Joel Ward effectively ended the contest.

Having scored three times in the opening half of a Premier League match for the first time, Palace took their foot off the gas after the interval – with Matt Phillips netting a phenomenal 40-yard strike.

It was little more than an impressive consolation goal, though, as Palace moved 11 points above Ramsey's men, who endured a miserable opening 45 minutes in particular at Selhurst Park.

Palace took a deserved lead midway through the first half as Yannick Bolasie sped up the left flank and sent an inviting ball across the face of goal for Zaha to convert, taking a heavy blow to the hip in colliding with the post for his trouble.

Damien Delaney lashed wide and the returning Glenn Murray headed off target as QPR struggled to stem the tide of home pressure, though Taarabt lashed over on a rare foray forward.

For all the Moroccan's attempts in attack, the visiting defence had no answer for Bolasie, who again left teenage right-back Darnell Furlong standing before McArthur slid in to convert another left-wing cross.

Not to be outdone by his fellow winger, Zaha turned provider for Palace's third before the break, tormenting three QPR defenders and feeding Ward to curl home from the edge of the penalty area.

Ramsey may have taken some heart from the performance of Taarabt, who remained willing throughout and almost presented Charlie Austin with his 16th goal of the season, but QPR's top scorer could only head straight at Julian Speroni in an otherwise sleepy second half.

Speroni was powerless to stop Phillips' wonder goal in the final 10 minutes, but Palace look safe in the top flight for another season after Pardew's impressive return to the club.