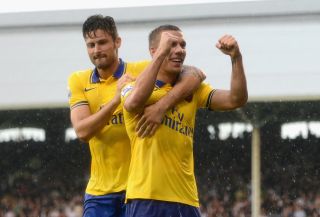 Germany international Podolski scored one in each half after Olivier Giroud had opened the scoring early on, before Darren Bent grabbed a late consolation for Martin Jol's men after coming off the bench for his home debut.

Fulham boss Jol made three changes from his side's 1-0 win at Sunderland, handing a debut to new signing Scott Parker and also bringing in David Stockdale in goal and John Arne Riise at left-back.

His under-fire Arsenal counterpart Wenger, meanwhile, opted to rest Jack Wilshere in favour of Podolski, while also making two enforced changes in selecting Carl Jenkinson and Santi Cazorla in place of the suspended Laurent Koscielny and the injured Alex Oxlade-Chamberlain.

Both sides started patiently amid torrential rain and it was Arsenal who carved out the first clear-cut chance of the game after 10 minutes when Theo Walcott was denied by Stockdale after latching on to a superb throughball from Tomas Rosicky.

But the visitors did not have to wait long to edge ahead, as Giroud opened the scoring just four minutes later.

There was an element of good fortune about the goal as Aaron Ramsey scuffed a shot from 20 yards that caught the striker's heel and ran perfectly into his path.

However, the France international still had plenty to do and he deftly lifted the ball over the advancing Stockdale for his second Premier League goal of the campaign.

Fulham responded well to that setback, though, and Wojciech Szczesny was forced to make an outstanding double save from Adel Taarabt and Damien Duff shortly afterwards.

The hosts continued to press for an equaliser but were served a warning of Arsenal's potency on the break when Walcott sprinted clear down the right and teed up Kieran Gibbs, only for the full-back to drag his shot wide.

Walcott was again heavily involved as the visitors doubled their advantage four minutes before the interval.

Stockdale saved the England forward's shot well after he had been played in by Cazorla, but Podolski followed up with an unerring side-footed finish from 18 yards to send Arsenal in two goals to the good at the break.

Fulham flew out of the traps with real intent in the second half and Szczesny saved smartly from Taarabt's drive just two minutes after the restart.

But Arsenal were again dangerous on the break, and Ramsey almost added a third in the 57th minute after Walcott had nodded Gibbs' deep cross back to the Welshman, but his shot was deflected wide.

That proved to be a pre-cursor for the third goal, as another slick counter-attack led to Wenger's side increasing their advantage on 68 minutes.

The ever-dangerous Walcott was again key, as he fed Cazorla down the left. The playmaker then rolled the ball back to Podolski on the edge of the area and the Germany international took a touch before arrowing a shot into the bottom corner.

Substitute Bent gave the hosts a glimmer of hope nine minutes later with a typical poacher's finish after Szczesny had parried Dimitar Berbatov's clever half-volley, but Arsenal held on to complete their sixth consecutive away Premier League victory.