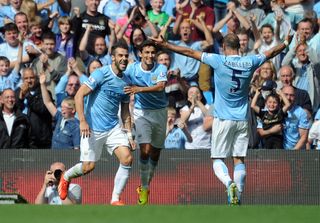 Negredo – who was introduced at the break for Edin Dzeko – nodded in Pablo Zabaleta's cross in the 65th minute, before Toure struck a late free-kick to give Manuel Pellegrini's men all three points.

Hull enjoyed the better of the first half, with Sone Aluko and Robert Koren going close, while Danny Graham had an effort ruled out for offside, but City did enough at Etihad Stadium to claim the win.

Pellegrini dropped Javi Garcia and Gael Clichy from the side that lost 3-2 to Cardiff City, replacing the pair with the fit-again Matija Nastasic and Aleksandar Kolarov.

Hull City boss Steve Bruce made 11 changes to the side that scraped through the second round of the League Cup against Leyton Orient, while Republic of Ireland midfielder Stephen Quinn won a place on the bench after recovering from a hamstring injury.

One of the new inclusions, Nigeria international Aluko, almost gave Hull a shock lead in the seventh minute after a loose ball broke to him and he raced through the Manchester City defence.

But with only goalkeeper Joe Hart to beat, Aluko scuffed his effort wide, failing to match his impressive run with a composed finish.

It was a warning sign for the hosts, and one they did not heed, as shortly after Dzeko tested Hull City goalkeeper Allan McGregor at the other end with a near-post header, the visitors went close again.

On this occasion Steve Bruce's men had the ball in the back of the net, but Graham's volley was correctly chalked off for offside.

McGregor reacted well to tip Joleon Lescott's header over the bar soon after, before Koren was next to go close for Hull.

The hosts slowed the tempo of the game down in the immediate aftermath, as the likes of David Silva and Toure helped them enjoy extended periods of possession.

But Hull dealt with every challenge they were presented with and went to the half-time break with their heads held high.

Frustrated by his team's inability to find a breakthrough, Pellegrini brought on Negredo, and the Spaniard had a good chance just minutes after coming on.

He was unable to direct a header on target though, following an excellent Silva ball, while Graham fired over for Hull at the other end.

Jesus Navas had an acrobatic attempt on goal fly wide soon after, but the hosts finally broke the deadlock in the 65th minute.

Zabaleta was the provider, with his looping cross from the right finding Negredo, who headed the ball into the ground and across McGregor to open the scoring.

Lescott had a late chance to double City's lead before Toure scored an exquisite free-kick to seal the result.

The Ivorian curled in a 20-yard effort which Ahmed Elmohamady could not keep out despite his desperate efforts on the line as City celebrated another home victory.