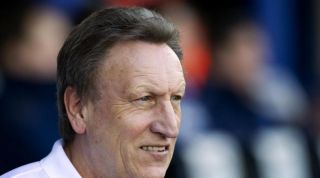 Zaha, who re-joined Palace on loan from Manchester United on Thursday, struck in the fifth minute of injury time at St James' Park on Saturday after a turnaround inspired by Newcastle teenager Rolando Aarons had seemingly given the hosts all three points.

Thrown on with Newcastle trailing 2-1, Aarons levelled matters with a 73rd-minute header before Mike Williamson turned home what looked to be the winner after the 18-year-old's deep far-post cross had cannoned off the woodwork.

Earlier, Dwight Gayle had made it a dream start for Warnock - who returned for a second stint in charge at Selhurst Park on Wednesday - as the striker put them ahead in the first minute, with Jason Puncheon giving them the lead again just after the break after Daryl Janmaat had equalised for Newcastle.

Aarons' introduction turned the game in Newcastle's favour, but Zaha's quality shone through in a gripping finale when he ensured Palace a share of the spoils.

Palace began with confidence and scored after just 30 seconds when Gayle slotted past a stranded Tim Krul from point-blank range after the Dutch goalkeeper had done well to tip Marouane Chamakh's effort on to his left-hand post.

Newcastle failed to mount a response after that early setback and instead it was Palace that came close to adding a second, Puncheon lashing over the bar at the near post after more good build-up play from the visitors.

The hosts did slowly begin to mount pressure as they dominated possession, and Alan Pardew's side found the leveller eight minutes before half-time when Janmaat scuffed beyond Palace goalkeeper Julian Speroni after seeing his initial effort blocked.

Palace replicated their fast start to the first half in the second, with Puncheon - named in Warnock's starting XI despite the pair having a public spat earlier in the year - proving his worth in spectacular fashion.

The winger was afforded the time to control the ball in the area by the Newcastle defence and unleashed an acrobatic volley into the bottom corner.

Yoan Gouffran was then denied a leveller by Speroni before Zaha - brought on for the injured Gayle - was thwarted by Krul.

Substitute Aarons headed in to equalise with 17 minutes remaining after Palace had failed to clear Remy Cabella's corner, and the game looked set to end in heartbreak for Palace when Williamson scored in the 88th minute.

But Zaha, who had already had one goal disallowed for offside, had the final say as he capitalised on sloppy Newcastle defending to seal Palace's first point of the new term.