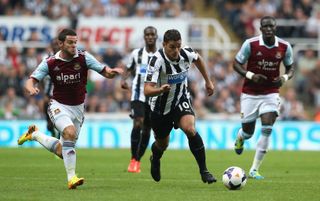 The winger's curled effort from the edge of the penalty box brought Newcastle their first victory of the season, and was a fitting reward for their efforts in a game they dominated.

Alan Pardew made a number of changes from the League Cup win over Morecambe in midweek, with Shola Ameobi keeping his place after scoring at the Globe Arena while captain Fabricio Coloccini returned.

Yohan Cabaye was also included in the hosts’ squad for the first time in 2013-14 having been previously excluded amid interest from Arsenal, while QPR loanee Loic Remy joined him in the dugout.

For Fulham, Darren Bent made his first Premier League start for the club since his loan switch from Aston Villa while midweek goalscorer Adel Taarabt dropped to the bench.

Newcastle began the brighter of the two teams, with skipper Coloccini seeing a header cleared from close range by John Arne Riise after four minutes.

But the game began to even out as time progressed, with Bent and Mathieu Debuchy having efforts on goal for the away and home sides respectively.

Alex Kacaniklic had a glorious chance to put the visitors ahead on the half-hour mark, when he latched on to a long ball from the back. However, he was unable to get clean contact and was dispossessed by the alert Debuchy.

Papiss Cisse then headed wide after a cross from Ben Arfa before the latter fired over in the last five minutes of the half, however, Fulham emerged unscathed to go in goalless at the break.

It took until 61 minutes for the first chance of the second half, with Ben Arfa striking a dipping effort at David Stockdale before Ameobi glanced a header wide a minute later.

Riise hit back for Fulham after 66 minutes when he forced a save from Tim Krul with a free-kick but Newcastle resumed control of the match in the aftermath.

Substitute Yoan Gouffran subsequently failed to connect with a Ben Arfa cross with 79 minutes gone, as the hosts continued to apply plenty of pressure.

And with five minutes of normal time remaining, their constant creation of chances finally brought a goal, as Ben Arfa cut in from the right-hand side of the box to fire brilliantly home.