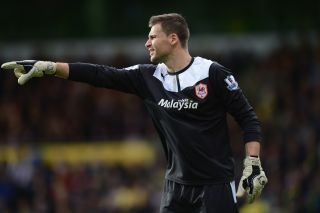 Fer was expected to give the ball back to Cardiff from a 94th-minute throw in given after the visitors had put the ball out of play at Carrow Road, but the Dutchman inadvertently rolled the ball into the net with keeper David Marshall out of his goal.

Rather than award the goal, though, referee Mike Jones ordered Norwich to retake the thrown in - much to the disgust of the home supporters.

This controversy came at the end of a match lit up by the heroics of Marshall.

The 28-year-old - who played for Norwich between 2007 and 2009 - produced a string of fine saves in his first outing against his former club to deny the hosts their second Premier League home win of the season on Saturday.

Jonny Howson and Leroy Fer went closest to breaking the deadlock for the hosts in the first half but could not find a way past Scotland international Marshall.

And Marshall continued his one-man mission to keep a clean sheet as he denied substitute Nathan Redmond and Fer after the break,

His opposite number - John Ruddy - was rarely tested as Malky Mackay’s men struggled to create chances, but, when they did, the 27-year-old made an excellent save from Jordan Mutch.

The goalless draw sees both sides end a run of two consecutive defeats in the Premier League, but leaves Norwich in the bottom three with eight points from nine matches.

Chris Hughton’s side were unchanged from their defeat to Arsenal last time out, with Ricky van Wolfswinkel returning to the bench having recovered from his recent foot injury.

The visitors brought Fraizer Campbell and Kim Bo-Kyung in to their starting line-up in place of Don Cowie and Aron Gunnarsson.

Norwich went close after just five minutes when Martin Olsson let fly from the edge of the penalty area. Anthony Pilkington fired a corner low to the Sweden international but his left-foot strike whistled just over the crossbar.

Ruddy was called into action for the first time in the 25th minute as Campbell raced away from Michael Turner inside the penalty area before pulling the ball back into the path of Mutch, only for the home goalkeeper to save brilliantly at his feet.

After that shock, Norwich resumed their dominance but could not find their way past the inspired Marshall.

He made two good saves from Howson and was well placed during a goalmouth scramble to stop the ball on the line.

And when the Cardiff keeper was finally beaten, he had Peter Whittingham to thank as the midfielder cleared Fer’s effort off the line from another Pilkington corner in 31st minute.

The second half began as the first had ended and Gary Hooper went close to opening the scoring. The forward met a corner inside the penalty area, but his flicked header dropped just wide of the post.

Cardiff’s only chance after the break fell to Whittingham but he wasted a free-kick just after the hour. The normally dependable midfielder fired straight into the Norwich wall from a promising position 20 yards out.

Redmond - who replaced Pilkington in the 71st minute - nearly made an immediate impact when he was released on the left, but the winger’s shot towards the top corner was parried away by the irrepressible Marshall.