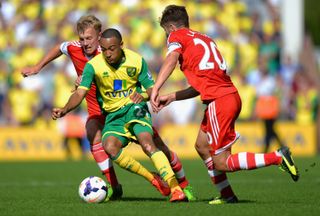 The 100th competitive meeting between these two sides saw chances aplenty, with both goalkeepers on top form, but Redmond's strike was enough to give Chris Hughton's side their first Premier League victory of the season.

Adam Lallana came closest to a goal for Mauricio Pochettino's men, volleying against the post, but Norwich created the majority of the chances, with England Under-21 international Redmond at the hub of their best play.

Hughton was without the injured Gary Hooper (shin) and Ryan Bennett, who needed stitches after gashing his knee in the League Cup tie against Bury in midweek.

Pochettino, meanwhile, handed a first start to Southampton's record signing Pablo Daniel Osvaldo, in place of Jay Rodriguez, while Guly do Prado and Jos Hooiveld missed out through injury.

The hosts started brightly and nearly opened the scoring after three minutes when Redmond, a close-season signing from Birmingham City, won the ball on the left and burst through to the edge of the area, striking a low right-footed effort that flew just wide.

Southampton had Artur Boruc to thank for keeping them level when he spread himself well to deny Leroy Fer, after Johan Elmander had flicked on a Robert Snodgrass free-kick. The rebound fell to Ricky van Wolfswinkel, but he poked wide.

At the other end, Bradley Johnson faced shouts for a penalty when Lallana's shot crashed into his outstretched arm. Referee Howard Webb, though, deemed the handball accidental.

Norwich then had a penalty shout of their own, Van Wolfswinkel's back-post header hitting Calum Chambers, but Webb again waved away the appeals.

The hosts looked the more dangerous and Chambers was again fortunate, this time not to score an own-goal, when he deflected Steven Whittaker's drilled cross-cum-shot wide of goal.

But Southampton still offered a threat of their own and Lallana almost put them ahead with a well-struck volley that beat John Ruddy all ends up before rebounding back off the post.

And that threat continued in the early stages of the second half, with Osvaldo twice being denied a first Southampton goal by good saves from Ruddy.

Norwich's aerial threat also continued, with Fer heading wide from a Snodgrass free-kick, before Elmander headed over from Redmond's cross from the left.

Redmond's winner came after 67 minutes when he cut in from the left and beat his man with a step-over, before hitting a low right-footed shot that flew in at the near post.

And Redmond almost grabbed a second with another solo effort, dribbling from just inside the visitors' half before seeing his shot saved, much to the annoyance of Van Wolfswinkel, who was free in the area.