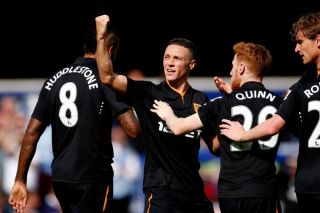 Having dropped out of the top flight in 2012-13, Harry Redknapp's men bounced back at the first attempt last season courtesy of a 1-0 win in the Championship play-off final against Derby County.

The hosts were the better team in the first half at Loftus Road, but they failed to build on their good start as Steve Bruce's side clinched a narrow victory, McGregor denying Charlie Austin from the spot with five minutes to play.

After their run to the FA Cup final last season, Hull also have Europe to contend with, and came into the game with competitive action already under their belts this term, but Bruce's priority will remain the Premier League.

With that in mind, the former Sunderland boss will have been enthused by his side's ability to seal all three points after struggling to cause QPR many problems in the first period.

Both sides started with three new faces as Ferdinand, Steven Caulker and Jordon Mutch all made their competitive bows for QPR, while Robert Snodgrass, Tom Ince and Andrew Robertson were Hull's Premier League debutants.

After an assured start from the visitors, QPR grew into the game and had the first effort of note in the 17th minute when Alejandro Faurlin dragged a shot narrowly wide following a scramble inside the Hull penalty area.

Joey Barton and Mutch both went close as QPR continued to look the more likely to break the deadlock.

The visitors felt they should have had a penalty in the 32nd minute, though, as Armand Traore tangled with Nikica Jelavic, but referee Craig Pawson awarded a corner only.

Hull's struggles to create chances were dealt a further blow as Snodgrass was forced off with a knee injury five minutes before the break and replaced by Quinn.

And they had Robertson to thank for heading in at the break level after the Scotland international scrambled Caulker's header off the line, with McGregor pawing the rebound away.

Seven minutes after the break Chester put Hull in front, getting the better of Ferdinand and heading Quinn's corner into the bottom left-hand corner from eight yards.

Quinn was influential again 10 minutes later as he led a breakaway and played in Ince, but the England Under-21 international was denied by the legs of Rob Green one-on-one.

Hull survived two late scares in the final 10 minutes as QPR searched desperately for an equaliser.

First, Tom Huddlestone hacked the ball off the line after it had bounced goalwards off the knee of Ferdinand.

And after Pawson harshly adjudged Chester to have handled in the area, McGregor stooped to his right to save Austin's weak effort as Hull shrugged off last season's struggles on the road to begin their campaign in fine fashion.