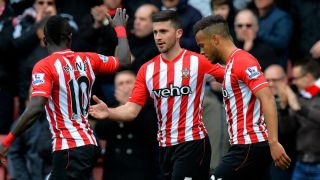 Forster was taken off after 10 minutes with suspected knee ligament damage, just ahead of the international break, and had to be replaced by Davis.

And the experienced 38-year-old pulled off first-half saves from Sam Vokes and Danny Ings before Shane Long gave the home side a 37th-minute lead.

An own goal by Jason Shackell after the break wrapped up the points for Southampton, who closed to within a point of fifth-placed Liverpool in the hunt for a UEFA Champions League spot, while defeat meant Burnley missed the chance to climb out of the bottom three.

The home side were dealt an early blow when Forster suffered an injury setback.

Forster fell as he kicked the ball clear and Vokes tripped over his outstretched leg, leaving the England international requiring lengthy treatment on the pitch before being carried off on a stretcher and replaced by veteran Davis.

Davis made an instant impact as he got down well to his right to save from Vokes following a cross by Ashley Barnes, before referee Roger East ignored Boyd's penalty claim after a Jose Fonte foul.

Eight minutes before half-time, Long, lurking at the back post, fired the opening goal into the roof of the net after the ball had been hit across a crowded penalty area by Nathaniel Clyne.

Pelle's close-range volley then hit the crossbar from a Southampton free-kick before Davis kept out Ings' shot in a frantic end to an entertaining first half.

Wanyama started the second half in place of Dusan Tadic as Southampton attempted to stifle Burnley.

Long went close to a second of the afternoon as he fired narrowly across goal following a knockdown by Pelle.

Southampton, though, did double their lead after 57 minutes when Steven Davis set up Ryan Bertrand and his cross hit Burnley captain Shackell's knee and flew past goalkeeper Tom Heaton.

Steven Davis crossed for Pelle, but the striker headed at Heaton as Southampton searched for a third goal.

But the home side had done enough to claim all three points and keep the pressure on the teams hoping to secure a top-four finish, leaving Burnley rueing missed first-half chances.