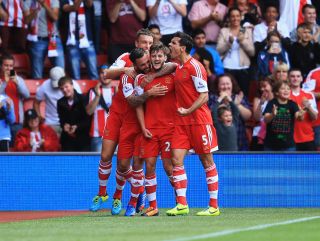 The hosts impressed in the opening 25 minutes and took a deserved lead through Adam Lallana, but Swansea gradually came back into the contest and were unlucky not to equalise before the break as Nathan Dyer hit the post.

Swansea dominated the second half, but for all their possession they struggled to create chances as the home side added a second in the 83rd minute thanks to substitute Jay Rodriguez.

Mauricio Pochettino made only the one change from their win over Crystal Palace as Danny Fox comes in for Luke Shaw, who missed out through illness.

Swansea were in UEFA Europa League action on Thursday and Michael Laudrup unsurprisingly rotated his squad by making five changes.

Michel Vorm, Angel Rangel, Dyer, Jonjo Shelvey and Jose Canas returned to the starting XI, with Jonathan De Guzman and Leon Britton among those who missed
out.

The visitors started the match brightly as Dyer looked to attack down the right, but Pablo Daniel Osvaldo was presented with the first chance as he held off Chico Flores before shooting over from a tight angle.

Southampton began to take control and break the deadlock 19 minutes in. Steven Davis played a controlled half-volley into the area for Lallana and the wide man burst away from Ben Davies before slotting past Vorm.

Swansea had three good chances to equalise in quick succession as Artur Boruc palmed away Michu’s header and a deflected Shelvey effort.

Their best chance came 10 minutes before half-time, however, as Dyer cut on to his left foot and fired a powerful effort on to the post.

The visitors continued to threaten after the break, but still they failed to find the net as Southampton academy graduate Dyer sliced a shot wide inside the area, while Wilfried Bony nodded Rangel’s cross over Boruc’s goal.

As the match progressed towards the hour mark, Swansea were the only side that looked like scoring, but they were finding it increasingly difficult to break through their hosts’ defence.

Despite Swansea’s superiority, Southampton were the next side to have the ball in the net as Victor Wanyama knocked in a corner, but referee Mike Dean disallowed it, seemingly for a marginal push elsewhere in the area, much to the hosts’ fury.

However, that soon dissipated as they doubled their lead in the 83rd minute.

Chico failed to deal with a long ball from defence and substitute Rodriguez bullied him off the ball before stroking a shot into the bottom corner, and they held on for a fourth straight Premier League clean sheet to cement a fine start to the campaign.