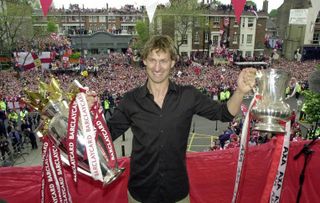 Here the PA news agency picks out another of the domestic game’s most dependable heroes.

A titanic presence at the back for Arsenal across three decades, the crowning glories of the local-lad-done-good’s career came when he helped the Gunners to the Double in both 1997-98 and 2001-02.

Romford-born Adams joined Arsenal as a schoolboy and only four weeks after his 17th birthday he made his first-team debut against Sunderland on November 5, 1983, but it would be a couple of years before he established himself.

Alongside full-backs Lee Dixon and Nigel Winterburn and fellow centre-half Steve Bould, Adams formed a rock-solid back four that would thwart opposition attacks for most of the 1990s.

Despite his career trajectory continuing upwards after being appointed captain at 21 as Arsenal collected a host of honours, Adams’ off-field troubles were mounting due to a much-publicised addiction to alcoholism.

He served four months in prison after crashing his car while four times over the drink-drive limit in 1991 but the arrival of Arsene Wenger dovetailed with his sobriety, with the Frenchman lending a sympathetic ear to Adams.

Adams rewarded his manager’s loyalty by helping Arsenal to their first Premier League crown in 1997-98 – a season where they also won the FA Cup – finishing the scoring with a striker’s finish in a 4-0 win over Everton that secured the title.

Four years later and Adams was part of the side that again won the Double – making him the only player in English football history to captain a side to the title in three different decades – but he would bow out at the end of the season after nearly 20 years and 674 appearances with the north London club.

Adams was capped 66 times by England between 1987 and 2000 while he had largely unsuccessful stints as manager at Wycombe, Portsmouth and most recently at Spanish outfit Granada in 2017. Currently, Adams is president of the Rugby Football League.