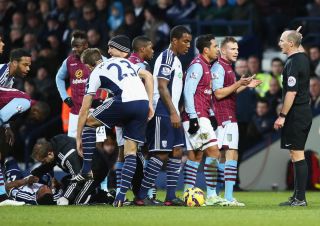 The hosts ended a run of five games without a win, breaking Villa's five-match unbeaten streak in the process, as Gardner returned to haunt the club where he made his professional debut.

Villa had hung on for 50 minutes a man down after Kieran Richardson, the only change to the visitors' starting line-up, saw red in the first half for a foul on Stephane Sessegnon.

Alan Irvine's side dominated possession but it was a scrappy goal 18 minutes from time that finally lifted the air of frustration that had started to build around The Hawthorns.

Gardner was in the right place at the right time to prod home after some last-ditch defending from Villa, who lost for the first time since November 2.

Silvestre Varela skipped away down the left and swung in a testing cross inside the opening five minutes, but Brown Ideye was crowded out at the back post as he looked to get a header on goal.

Brad Guzan was called into action three minutes later as he somewhat untidily kept out Sebastien Pocognoli's angled drive at his near post.

The visitors were reduced to 10 men in the 22nd minute when Richardson lunged for the ball and caught Sessegnon instead, leaving referee Mike Dean with no option but to send him off.

West Brom sought to capitalise on their extra man and Ideye was denied the chance to connect with Sessegnon's delivery by what appeared to be a nudge in the back from Jores Okore.

The pattern of play was set, though, and Irvine's men continued to pour forward in search of an opener as their supporters cranked up the noise levels.

The hosts did not have it all their own way, however, and Gabriel Agbonlahor saw a shot from the edge of the box deflect into the hands of Ben Foster seven minutes before the interval.

Yet West Brom should have gone in ahead, with Guzan forced into a smart stop with his foot from Sessegnon's effort after Pocognoli had wriggled free inside the box to pick him out.

Paul Lambert introduced Fabian Delph at the break for his first Villa appearance since October 4 after sustaining a shoulder injury.

The England international was called to lend his efforts to a rearguard action as the home side pressed and probed, with Varela's back-post volley forcing a brave block from Alan Hutton.

For all their possession and territory, West Brom's lack of poise in key areas - epitomised by Ideye's wayward 64th-minute volley - was all too apparent.

The lively Sessegnon was able to find the target three minutes later, but Guzan was well positioned to gather the Benin international's low strike.

Irvine turned to top scorer Saido Berahino for the final 20 minutes as Graham Dorrans made way, but it was a more unlikely source who provided the breakthrough.

Hutton had done well to deny Ideye in the six-yard box, with the lively Sessegnon then seeing his shot blocked before Gardner side-footed beyond the helpless Guzan.

Villa's emphasis had to change and Delph's free-kick almost led to a leveller, but Christian Benteke's flick drifted narrowly wide and that was as close as they came to earning a point.