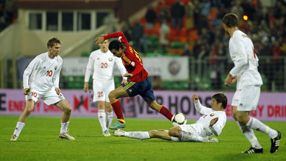 "I've never seen such a disgrace for our nation," Lukashenko told reporters in reference to a 4-0 thrashing by the world and European champions in Minsk last Friday.

"Our national team, excuse my language, just shit themselves. They came out on the pitch with their legs and arms shaking."

Lukashenko, an avid sports fan who also serves as president of his country's Olympic Committee, said Belarus should try to emulate other smaller nations - such as Georgia - when they take on big teams.

"Look at the Georgians... they fought against Spain to the last minute... can you say that about our team?" he asked.

Georgia lost 1-0 to Spain in last month's Group I qualifier after conceding a late goal.

Authoritarian Lukashenko, alienated by the West who have punished his lack of tolerance for dissent with sanctions, said he had demanded a full stadium for the Spain game.

"I'd tell you the truth, we had used the administrative levers to bring 40,000 people to fill the stands," he said.

The Belarussians, who are bottom of the group after losing all three of their opening qualifiers, will have a chance to redeem themselves later on Tuesday when they host Georgia in Minsk.