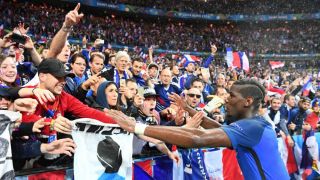 The pressure on Paul Pogba has been too much for the France star to bear at Euro 2016, according to former full-back Bixente Lizarazu.

The form of Pogba during the finals has come under constant scrutiny by the home supporters and media alike, particularly during France's unconvincing displays during the group stage.

The 23-year-old scored his first goal of the tournament with a towering header in the 5-2 quarter-final victory over Iceland on Sunday, as the host nation produced their best performance of the finals to date to set up a last-four meeting with Germany.

But Lizarazu, who won the 1998 World Cup and Euro 2000 during a glittering career, believes Pogba has been inhibited by his billing as one of the potential stars of the competition.

"Pogba has great potential. He has it all - technical quality and physical prowess. The problem is we expect a lot from him and we want to see him at his highest level all the time," he told AS.

"Sometimes, we forget that he is only 23, that there's always development in a footballer. It's not easy for him to cope with the pressure and that's been noticed in the tournament."

Lizarazu was keen to praise the performances of key attacking duo Antoine Griezmann and Dimitri Payet.

"Griezmann is a player who always looks calm on the pitch. This is not the Griezmann of the World Cup, who was able to play well but wasn't obliged to make the difference," he said.

"He can decide things and he's been doing that. He was key to Atletico Madrid in their big games with Barcelona and Bayern [Munich], and he's done the same in high-pressure games for France.

"Six months ago, Payet wasn't in the squad. It's incredible what he's done. He has played world-class games."

Lizarazu believes France have achieved a minimum objective by reaching the semi-finals but is concerned a lack of cohesion between midfield and defence could cost them against the world champions.

"I think France are where they should be, even though they have suffered more than they would have hoped," said the former Bayern left-back. "It was a mixture of wanting to do things well and being afraid of doing things badly.

"Playing in the semi-finals is the minimum potential of France. They had a simple group and then straightforward knockouts. Until now, they could mistake mistakes, but the semis of a European Championship are another story because a mistake can send you home.

"We've been improving, but some aspects, like the balance between midfield and defence, are key to beating the big teams."