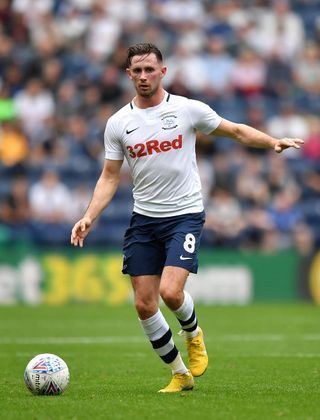 Preston reached the Carabao Cup third round after beating Hull 5-4 on penalties following a 2-2 draw at Deepdale.

Paul Huntington and Josh Harrop put the Lilywhites ahead before Josh Magennis’ penalty handed the Tigers a route back before the break. Jarrod Bowen scored at the death to take the tie to a shoot-out.

Tom Eaves saw his spot-kick saved by Preston goalkeeper Connor Ripley and Alan Browne scored the winning penalty for the home side.

The Tigers halved the deficit after 34 minutes when Magennis fired in from the spot after Leonardo Da Silva Lopes was brought down in the box by Browne.

Barkhuizen stung Ingram’s palms with a fierce effort, while Andre Green forced the Hull keeper into a diving save in first-half stoppage-time.

Kevin Stewart nearly scored a spectacular equaliser with a long-range effort on the hour-mark which sailed inches over.

Jon Toral turned in the box and Ripley preserved his side’s lead, while Harrop nearly added his second with less than 15 minutes left after darting into the box but dragged his effort just wide.

Ripley’s sublime double stop moments later denied Toral and Nouha Dicko after great work from Hull’s Bowen, who himself took the tie to penalties after dinking over Ripley from close range deep into stoppage time.