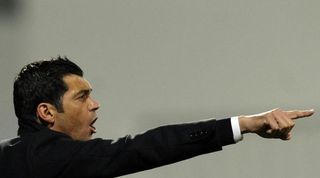 Braga made the trip to Parque Desportivo expecting to pick up their second win of the Primeira Liga campaign after beginning the season with a comfortable 3-0 triumph over Boavista.

However, the hosts made sure Sergio Conceicao's men endured a tough day.

Although neither side could find the back of the net, the first half saw both sides produce some good football, with the hosts on top for larger periods.

Moreirense showed more initiative and saw more of the ball, while both Arsenio and Alex saw decent chances go begging.

Despite having the upper hand during the first half-an-hour, the home side struggled to test Stanislav Kritsyuk in the Braga goal.

An injury to Marcelo Goiano in the 22nd minute proved to be a blessing in disguise for Conceicao as his replacement Salvador Agra posed a real threat on the flank.

Following the change, Braga were more aggressive in attack and Rafa Silva crafted good opportunities for Felipe Pardo and Eder just before the break.

Clear-cut chances were even more infrequent after half-time, with Arsenio spurning the best chance at the end of an encouraging counter-attack.

In the end the two sides cancelled each other out and both moved on to four points for the season.