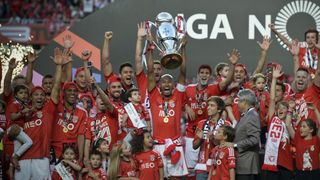 Benfica ended their Primeira Liga-winning season with a 4-1 crushing of Maritimo on Saturday.

Already assured of the Portuguese top flight title due to their head-to-head record against Porto, Benfica celebrated their 34th league crown with a resounding victory at the Estadio da Luz.

Lima struck in the sixth minute, but Maritimo made Benfica work for it - the visitors equalising just past the half-hour mark when French striker Moussa Marega extended his scoring streak to five games.

But Benfica's Brazilian brigade responded in kind - Jonas re-taking the lead for the hosts in the 42nd minute.

Lima and Jonas sewed up braces in the second half, much to the delight of the 60,532 fans - who watched on as Benfica were presented with the trophy post-match.

Sporting Lisbon extended their unbeaten streak to 13 matches in all competitions, as Nani's goal sent them past Rio Ave 1-0.

Gil Vicente's frustrations boiled over, as they finished with nine men at home to Belenenses - who claimed a 2-0 victory.

Estoril won for just the third time since January, downing Boavista 2-0 at home, while Nacional finished their campaign with consecutive victories as they defeated Pacos de Ferreira 3-0.

Moreirense had a Gerson Fernandes brace to thank for firing them to a 2-1 win at Arouca, while Vitoria Guimaraes were powered by a Valente double to a 4-2 win at Academica.