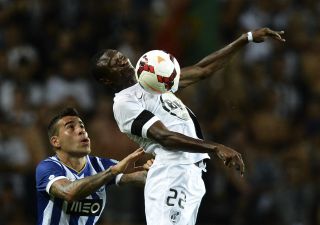 The Nigerian striker arrived at the club in June and made an immediate impact on his league bow with two second-half strikes that sent new Olhanese manager Abel Xavier to defeat in his first league game in charge.

Maazou - signed from Etoile du Sahel in Tunisia - broke the deadlock five minutes into the second half with a mesmerising run that ended with a cool finish past Ricardo.

His second came in the 73rd minute as he rose to head home from close range, although Ricardo should perhaps have done better as the ball squirmed under his body.

The visitors ended the match with 10 men after on-loan defender Sebastian Mladen - also making his debut - was shown his second yellow card midway through the second half.

After a fifth-place finish last season, Estoril began their Primeira Liga campaign with a 3-1 home victory over Nacional.

Marco Silva's side had to come from a goal down to get the three points, scoring three times in just five minutes either side of the break after Djaniny had given the visitors the lead.

Brazilian striker Evandro began the comeback with a goal in the final minute of the first half, before Carlitos added a second in injury time.

Evandro added his second, and Estoril's third, two minutes after the restart to give the home side a comfortable victory.