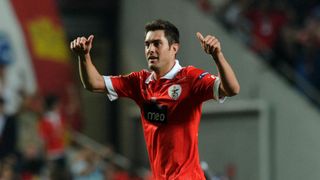 Jefferson had given Sporting an 87th-minute lead with an 18-yard strike after Artur Moraes had parried into his path from an earlier effort.

A win would have seen the third-placed hosts close to withing four points of the league leaders, but Jardel had other ideas.

The Brazilian found the net with a low drive from the centre of the penalty area four minutes into stoppage time to snare a point in the Lisbon derby.

The result sees Benfica concede two points to Porto in the race for the title, but preserves their seven-point cushion over Sporting.

Vitoria Guimaraes slipped to fifth with a 1-0 home defeat to 10-man Belenenses, with Andre Andre failing to find the net from the penalty spot after Carlos Martins had given the visitors the lead.

Martins was sent off for a second bookable offence in the 90th minute, but Belenenses held on for the win.

Braga capitalised on that defeat to go fourth with a 2-0 win at Estoril.

At the other end of the table, Gil Vicente boosted their survival hopes with a 2-1 win at Maritimo.

The strugglers came into the weekend at the foot of the top flight, but came from behind to see off their hosts, who were reduced to 10 men in the second half when Bruno Gallo was shown a second yellow card.

Arouca and Nacional drew 3-3, and Academica played out a 0-0 draw at Vitoria Setubal.