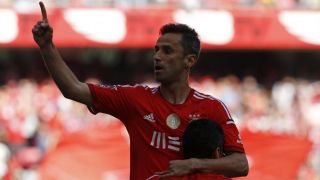 Leaders Benfica retained their three-point advantage at the summit with a 5-1 thrashing of Academica.

Jardel gave the hosts an eighth minute lead before Brazilian forward Jonas continued his purple patch in front of goal with a brace either side of Lima's penalty that made it 3-0 in the 19th minute.

Jonas has 14 goals in 21 games for Benfica this term, with nine of those coming in his previous seven outings.

Porto underwent a slightly sterner examination before running out 3-1 winners at Rio Ave.

Tarantini threatened a plot twist when he pulled it back to 2-1 with 19 minutes to play, but Quaresma's replacement Hernani ensured Porto remained on Benfica’s heels by finding the net after 83 minutes.

Moreirense came from behind to beat Vitoria Guimaraes 2-1, with both sides losing a player to a red card.

Vitoria held out until half-time but Andre Simoes found an equaliser and Joao Pedro proved to be Moreirense's match-winner, although he soured his evening by collecting a second yellow card in stoppage time.

Maritimo were 2-0 winners at Boavista.