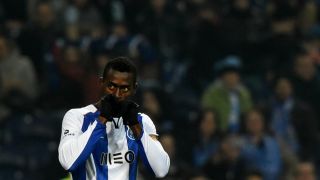 Porto closed the gap on Primeira Liga leaders Benfica to three points on Saturday with a 3-1 victory at Penafiel.

First-half goals from Hector Herrera and Jackson Martinez put Julen Lopetegui's side in control, before Rabiola pulled one back for the hosts five minutes after the restart.

Hopes of a fightback were shortlived, however, as Oliver Torres restored the two-goal cushion on 62 minutes, and Porto went on to secure a fourth straight victory.

Benfica can re-establish their six-point advantage on Sunday with a win against Maritimo.

Meanwhile, Vitoria Guimaraes climbed to third after a 4-0 thrashing of Academia, who slip further into relegation trouble as a result.

Goals from Valente, Tomane, Hernani and a penalty from Andre Andre, gave Vitoria a second four-goal victory in two weeks, either side of a 3-0 defeat to Benfica.