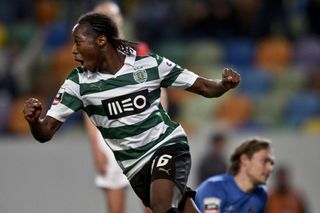 Leonardo Jardim's side leapfrogged Porto and moved within two points of leaders Benfica, but they were nearly made to rue their profligacy.

Sporting completely dominated the first half, setting the tone from the beginning as Andre Martins had a shot deflected wide before Mauricio missed the target with a header.

Carlos Mane scored the game's only goal in the 15th minute as the 19-year-old netted for the third time in six matches.

Colombian Fredy Montero set up the goal, squaring across the six-yard box for Mane to tap in at the far post.

The chances kept coming for Sporting as Adrien Silva had a fierce effort saved, while Martins headed into the side netting and they also had a goal ruled out for offside.

Olhanense improved considerably after the break though, with Lucas forcing a good save from Sporting goalkeeper Rui Patricio.

Sporting's Peruvian Andre Carrillo nearly sealed the result with a spectacular strike, but he was denied by the post.

Saturday's other match saw Belenenses play out a goalless draw against Academica.

The result lifted Belenenses fail to break down an Academica side whose winless streak was extended to four matches.