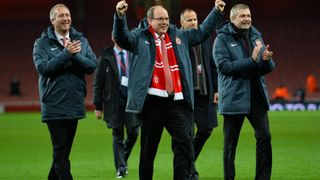 Monaco put Arsenal on the brink of elimination on Wednesday thanks to goals from Geoffrey Kondogbia, Dimitar Berbatov and Yannick Ferreira-Carrasco at the Emirates Stadium.

Depleted by injuries and suspensions, not much was expected of Monaco in a reunion with former boss Wenger but Kondogbia and Berbatov had other ideas as the pair struck on either side of the break to put the visitors in control.

Alex Oxlade-Chamberlain came off the bench and pulled a goal back for Arsenal in the first minute of stoppage time, but Monaco substitute Ferreira-Carrasco struck at the death to give Leonardo Jardim's men the upper hand heading into the return leg on March 17.

Monaco's head of state, Prince Albert II, who attended the match, conceded he was stunned by the result after meeting with Wenger prior to kick-off.

"I never thought I would see this scoreline here but it's deserved," he said.

"A draw would have been great for us. Before the game I met Arsene and asked him to be kind to us.

"I'm sort of sad for him, for us to have stolen the show."