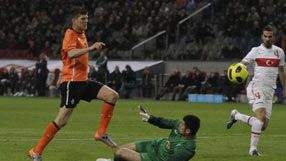 Huntelaar settled the match seven minutes into the second half, netting a cross from Robin van Persie who had intercepted a sloppy pass from the Turkish defence.

It was Van Persie's first appearance in the Dutch team since the 2010 World Cup final defeat by Spain four months ago.

Turkey, coached by Dutchman Guus Hiddink, had their chances to level but Umut Bulut's powerful header was saved by Maarten Stekelenburg, while Kazim Kazim fired into the sidenetting with the goal at his mercy.

The hosts took their time to take control of the match, threatening the Turkish goal five minutes before the interval when Wesley Sneijder fired a free-kick into the wall before his follow up was saved by Volkan Demirel.

"It was a real match against opponents with several new players who wanted to prove themselves and their enthusiasm gave us several problems," Van Marwijk told a news conference.

The Dutch received a bad blow in the last minute of the first half when central defender Joris Mathijsen landed awkwardly after an aerial challenge and was carried off on a stretcher.

"Joris sustained an ankle injury that seems very serious right now," said Van Marwijk before adding that more checks would be carried out on his player on Thursday.

Counterpart Hiddink was pleased with the performance of his new-look team.

"With 12 new names (in the squad) and only two days of training, it satisfies me to see how we played offensively and defensively," said the Turkey coach.

"Losing 1-0 against the World Cup runners-up is a good lesson for my players."